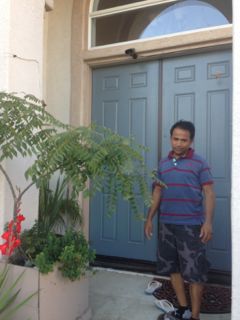 Rajnish invited me into his terraced garden in Newhall California, which is a suburb north east of Los Angeles. I am grateful that he wanted to show me his garden; with a wife, a 3 year old and a 2 month old he does not have a lot of extra time.

Rajnish said he learned gardening from his grandfather who had a large 20 acre farm in India.  After buying his home 4 years ago Rajnish started growing his own veggies.  He enjoys gardening and is passionate about feeding his family healthy food.  As we headed out the back door he told me it was “steep” garden and as we rounded the side of the house I saw what he meant.  He had created 3-tiered terraced garden beds on the hillside between his and his neighbours house. 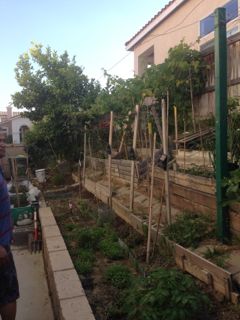 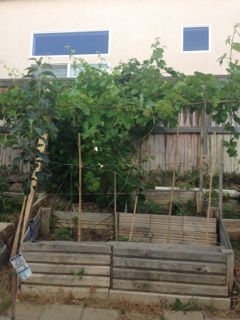 Most of us would have chosen the ease of the flat back yard to garden, however this area of his yard gets some shade from the very hot sun in the southern California climate making it an ideal spot for a terraced garden.  He built up the beds with cement and wood sides to hold the soil.  He created small pathways so he can access the various areas.  It looks a bit haphazard; however once you start looking at the beds he is growing a tremendous amount of vegetables. 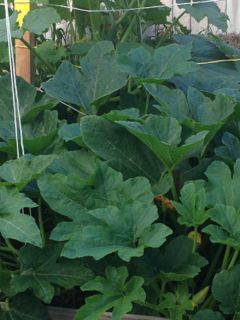 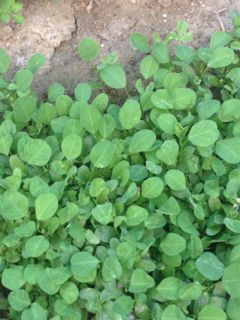 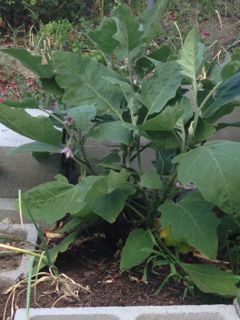 In one corner he has a huge fig tree.  He pointed out squash (Indian varieties such as opo, snake gourd, bottle gourd), Malabar spinach, peppers, tomatoes, fenugreek, potatoes, eggplant, and garlic scattered around as his pest deterrent.  During the winter he had cauliflower and potatoes growing, they are finished now and have been replaced with newer plants. 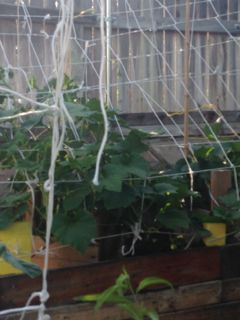 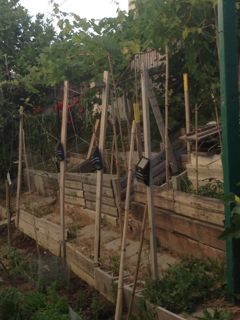 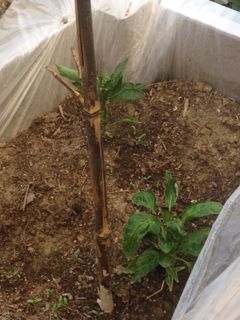 He also has some raised bed (with wooden bottoms) with peppers growing, so the gophers cannot get in to them. Gopher and other vermin are his main pests.   He put up a chicken wire fence along his metal fence to help keep these animals out.  He has also seen a rattlesnake or two, so he does a quick check of the grass before heading out to the garden in the morning. 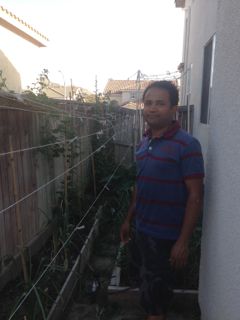 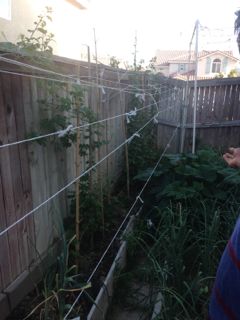 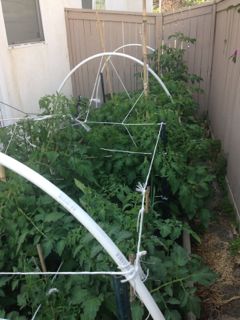 Back through to the front of the house there is a large raised bed of tomatoes, which seed themselves.  Something I have found out happens in California, unlike our gardens in the northwest.  He has some lettuce growing between the tomato plants and when those are done he will plant some garlic.

At the front door he has a curry tree, oregano, and sage in pots, between the walkway and the side of the garage he has some gladiolus with spinach intermixed together, a huge aloe vera plant (we can only grow these inside as house plants back home), and a non-thorn blackberry bush.  On the other side of his garage he made few more raised bed along the hillside where he planted tomatoes last year.   Every available spot has some kind of edible food, very impressive. 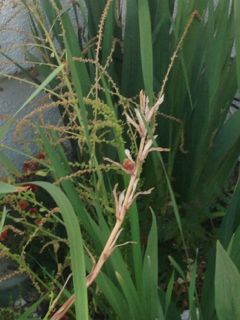 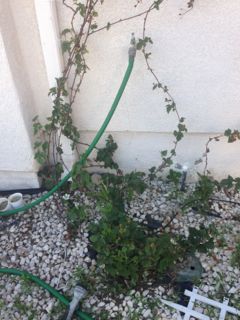 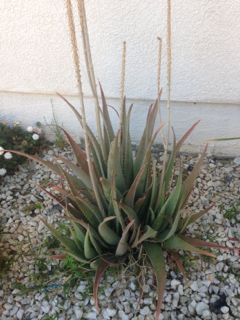 When I asked what his main challenges were he said good soil, time and water.  He makes his own compost, sometime just burying it in the ground, so over the 4 years his soil had gotten much better.  He regularly adds in all-purpose NPK fertilizers and occasional a seaweed fertilizer for extra minerals.  He uses grass clippings, leaves and accesses the local collection and recycling of kitchen and shrub waste for mulch that he puts on top of the beds.

Watering is an issue, with watering restrictions; the heat, time restraints and his soil not retaining water it can be challenging.  Aphids are also a problem due to lack of water and the heat.

When asked what plans he has for the future, he said with more time and money he would like to properly terrace the side garden with reinforced walls and pathways and build a trellis along his side fence for growing his Indian squashes, as they like to hang.  I can see Rajnish doing both of these things; for man who says he tries to fit in a half hour here and there for gardening he is a man full of energy and innovation.

During my visit I learned about quite a few new vegetables that I had not known about, had some tasty snacks, and have an offer from Rajnish to give me some advice about my website.  A very productive visit.

It was a pleasure to meet Rajnish and his lovely family, thank you for inviting me into your garden.