George and Nettie have a magnificent kitchen garden. They have grown vegetables on their land since 1965.  I could feel the history in the land.  The soil looked rich and dark and smelled earthy.  I could see that a lot of time and love and soil amendments had been added over the many years.  I knew I had truly found a hidden gem in this beautiful kitchen garden. 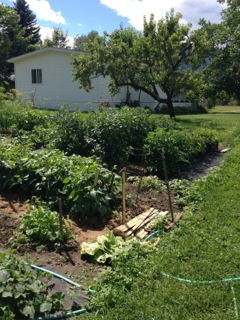 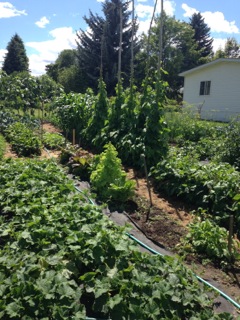 George told me he adds compost, chicken manure, cow manure, worm castings, bone meal and peat moss on a regular basis to the soil.  He adds amendment in the spring and again in the fall after everything has been harvested.  He plows the manures under twice a year.

To keep the weeds down he loosens the soil around the base of the plant and covers the area with mulch.  Mulch he used are grass clippings, straw and black plastic. 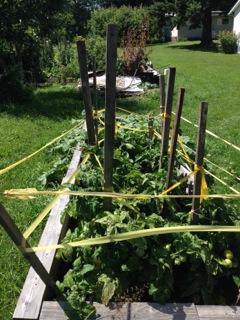 In the early spring he plants his first crops of kohlrabi, onions, carrots, cucumber, peas and potatoes in a couple cold frames in the middle of his back yard.  He is eating cucumbers by the end of April, a good few months before others in his area.  The cold frames are in full sun and give the plants shelter they need earlier in the season.

By the end of May when the sunlight is warmer he plants the main garden area.  In the main area he had beets, tomatoes, cabbage, kale, lettuce, more potatoes, and corn growing.  George shared they use heritage tomato seeds that are saved from year to year. 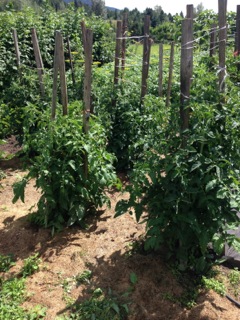 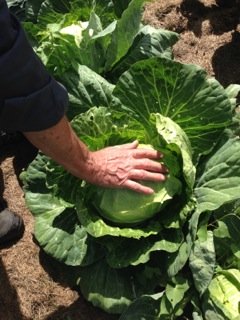 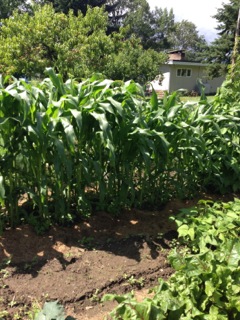 There were rows of perennials such as asparagus, raspberries and strawberries.  He also had a magnificent row of sunflowers a “A wonderful snack when dried and roasted” according to George. 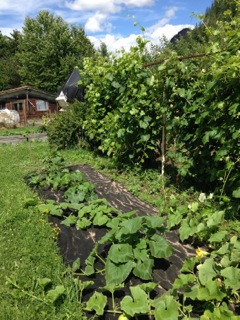 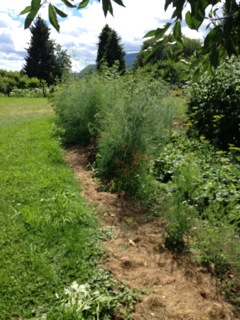 Storing veggies from the Kitchen Garden.

They grow and harvest a huge amount of vegetables so they can store and use them throughout the winter months.  It is quite cold in this area with below freezing temperatures for several months of the year so having fresh vegetable during these cold months keeps them healthy and saves on the grocery bill.  They store potatoes, carrots and beets in a root cellar.  They dry garlic and hang it in the garage.  They store apples away from the veggies.  When I visited in early July, they had just pulled out their last 5 gallon pail of apples. 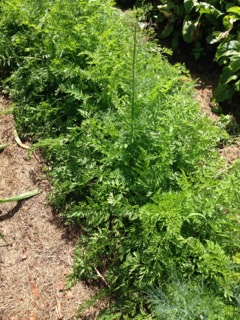 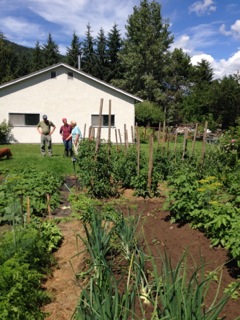 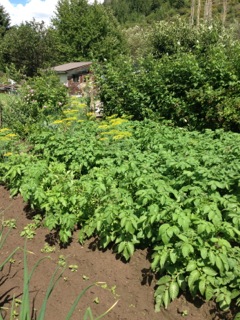 There were several apple trees, peach trees, sour cherry trees, grapes growing throughout the few acres of land.  All eaten fresh and used to make preserves, which Nettie was in charge of. The raspberries growing here were also shared with Sarah when she first started growing her garden.  All part of helper their neighbours.

George was clear that he does not spray his vegetables or fruits trees. He lets nature take its course and by keeping his soil fertile and healthy, he is getting a huge amount of food from is backyard. 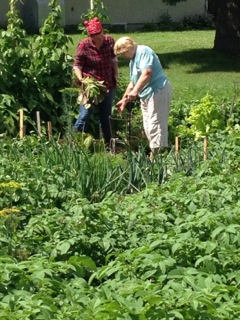 George also tends his bees.  He only had one hive at time, however has had bees for many years.  One tip he gave me – don’t cut the grass too early.  He lets the clover grow to feed the bees.

Sarah and Greg of Beekeepers Garden introduced me to their neighbours, Nettie and George.  I had a wonderful visit with both gardeners.  I enjoyed getting to know them both and the beautiful area they are living in.  Thanks for the informative garden visit.