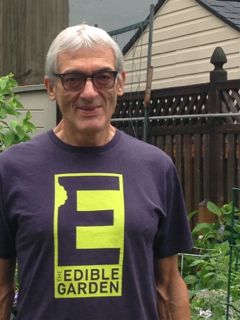 David welcomed me into his city oasis garden and his spectacular renovated 1876 townhouse in Greenpoint, Brooklyn.  It was drizzling and the weather was cooler than normal but we toured the garden straight off.   I walked out to a patio overlooking a beautiful enclosed area, there were raised bed filled with healthy looking veggies, perennial beds and every corner had something growing. 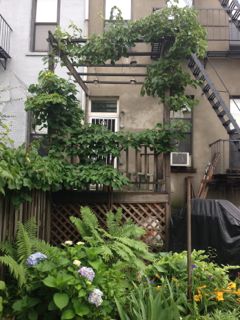 David is a retired Ebeniste; he trained and lived in France and Holland from 1967-1981 and he bought his townhouse in 1987.  When he purchased the property there was a 300-year-old weeping willow in the back yard with the huge branches shading the whole area.  Unfortunately in the late 80’s the New York area was infested with the longhorn beetle and the tree had to be cut down; this gave him an open spaced back yard so he decided to start growing some veggies and created his city oasis. 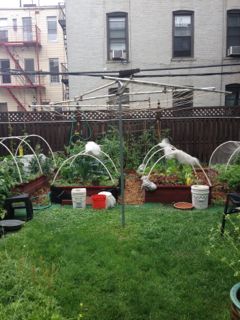 View of Back yard

Choosing to start a garden in this area was no small feat as the backyard is totally enclosed.  The only access is from the front of the house.  Every bag of soil, piece of wood and tool has to be carried down the front steps to the basement, through his gorgeous refinished basement and up the back steps into the back yard.  Most of us would never have even considered doing all this, however David did and now has a truly beautiful oasis in the middle of the city.  He has a beautiful green space and giving his neighbours above him a fabulous view.

The area has 4 raised beds, each 4 feet by 8 feet, a fifth bed 4 feet by 4 feet, more beds along the fence all with cedar mulch between them, a patch of grass, 2 perennial beds to attract wasps and bees, a stone patio where he stores his tools and a upper patio that overlooks the garden area with a kiwi growing up the side.   This city oasis is a very well-used space. 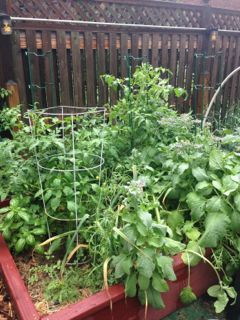 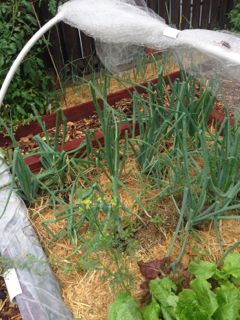 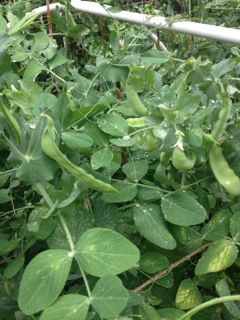 The beds are filled with a huge number of vegetables.  He has squash and chard in one bed, peas and kale in another, onions and lettuce in the third, then salad greens and carrots in the fourth bed, and tomatoes, peppers, and eggplant in the last one.

Along the fence there is garlic, leeks, stinging nettles, and herbs planted.  There are trellises for his peas and cherry tomatoes. 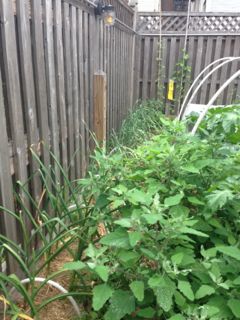 Garlic along fence, squash in bed 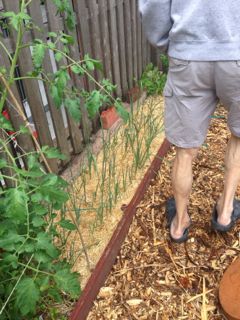 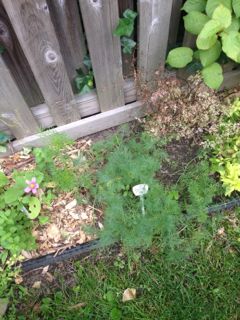 Wild plants like purslane, lamb’s quarter, borage (most of us call them weeds) are growing among the veggies in the beds as well.

Artichokes are growing in a pot as they can become very invasive in he garden. He does wish he had a big enough space for potatoes and corn. 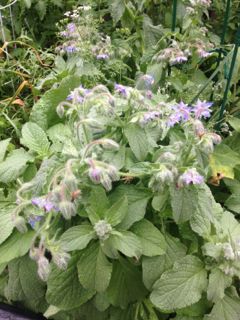 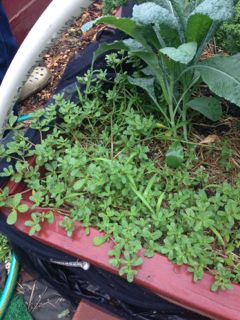 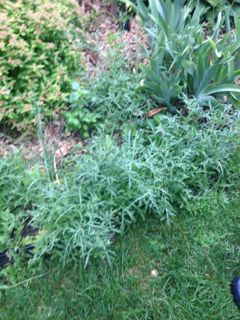 He starts all his seeds indoors in January and February and starts planting them outside in April.  He often has more seedlings than he has space for so you can find a tomato or lettuce plant among his perennial beds, as he’s unable to throw a seedling out.

David gets a soil test every year from International Ag Labs located in Fairmont, Minnesota.  This company will test your soil, give you an in depth list of what your soil needs and then makes up a broadcast for the biology of the soil specifically for your garden.  Along with this product he amends his beds with aged manure he collects from a friend in Connecticut. 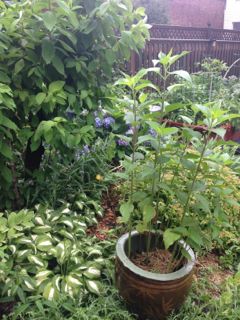 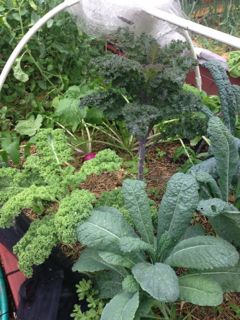 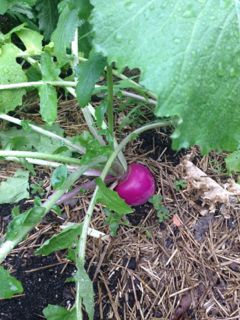 He is passionate about growing organically and taking the time to keep his veggies healthy, he observes his garden, looking under the leaves, checking how things are growing, this is one of the best ways to keep on top of any pest or insect damage in your garden.

His main challenge is that the back yard is north facing so he does not get as much sun as some of the veggies may want.

As for pests he fights off whitefly, aphids, ants and mosquitos.  For the whitefly and aphid he uses row cover, yellow sticky traps, and is trying a new organic product this year call “Nuke Em” For the ants he uses a product called Turbo.

The mosquitos make it uncomfortable to sit outside in the evenings so he makes sure there is no water standing around to deter them from breeding. 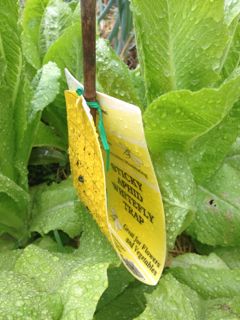 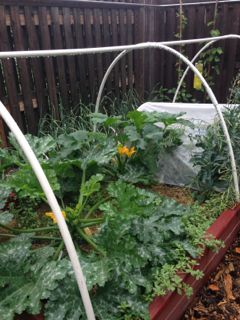 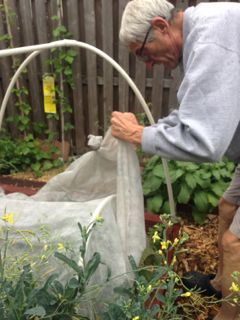 Chard protected from whitefly with Remay

Later in the season he often gets mildew on his squash.  He makes his own spray using stinging nettles.  In a 20-gallon pail he puts a kilogram of young nettles (before they flower) and covers them with 10 liters of water.  Stir it every few days and once the mixture stops foaming and bubbling it is ready to be used.  He dilutes the mixture in a spray bottle then sprays the plants.  This spray works for aphids as well.

He has a helper come in once a week to assist with the heavier work.  Gardening can be a lonely pursuit so he enjoys having someone to throw ideas around with.  He is always looking for new ideas and ways of doing things. 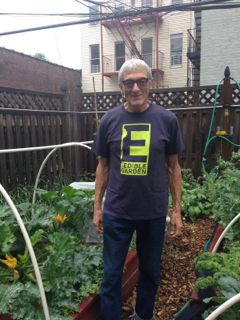 David in the Garden 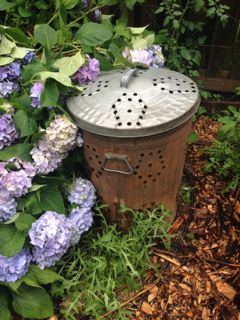 Compost among the perennials

I found my visit informative and very enjoyable.  David has a beautiful home filled with antiques and outstanding furniture; he shared stories about his time as an ebensite and his travels to Europe.  We went out for dinner and while walking in the neighbourhood I got a history lesson about Greenpoint.  He has a wealth of knowledge about opera and ballet so we spent the evening listening to beautiful music.

David also loves to cook, so after a tasty breakfast, cappuccino and another tour around the city oasis garden I left feeling totally inspired and wanting to come back and visit New York City again.

David, thank you for your wonderful hospitality.